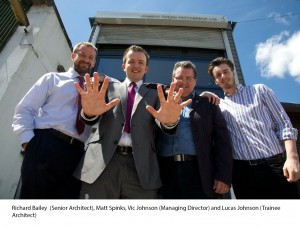 One of Shropshire’s leading architects is celebrating a decade of service by putting the finishing touches on his 200th project.

Matt Spinks is celebrating ten years at Bridgnorth-based Johnson Design Partnership (JDP) by working on a raft of exciting contracts, ranging from new hospital developments in London to local sporting community projects and the next generation of home transformations.

The former Bishop Milner School pupil has played a key role in the practice’s recent growth that has seen it smash the £300,000 turnover barrier for the first time.

He has also been involved in some of the company’s most high profile contracts, including a feasibility study for a footbridge joining Molineux Stadium to Wolverhampton University and the City Centre and a proposal for a new hotel in Uganda on the River Nile.

“It has been an exciting ten years, full of lots of challenges, changes in legislation and the great feeling of seeing your designs come to life…some have taken longer than others to happen,” explained Matt, who boasts BA Hons Degree, Diploma and Post Graduate Diploma in architecture.

“Our industry has changed dramatically over the last decade and there is now a greater appetite for more innovative design, not to mention changes in building regulations that create environmentally friendly buildings to live, work and play in.”

He continued: “The introduction of the Community Infrastructure Levy and Section 106 for self-build homes are also having an impact.”

Matt’s 200th project is fittingly the iconic Bishop Percy’s House in the centre of Bridgnorth.

JDP has been asked to transform the 16th century Grade 1 listed building into a ‘Tea Room’, museum and 6 holiday lets, including two situated at the rear of the property.

The project will start on site later this year and will take approximately six months to complete. Retaining the historical detail requires painstaking attention to detail and other special features include a grand fire place, medieval sandstone columns and exposed timber construction between the main house and adjoining cottage.

In addition, the contemporary holiday lets allow open plan living at first floor level, with the balconies taking in amazing views over the River Severn and up towards Bridgnorth’s High Rock.

“Johnson Design Partnership has given me a great learning experience and exposure to virtually every scenario associated with architecture,” explained Matt.

“I’m now keen to start giving something back and have already mentored seven Architectural students at various stages of their education, not to mention a number of work experience placements from local schools.

“My other ambition is to design my own home…naturally here in Shropshire.”

Vic Johnson, founder of JDP, concluded: “Matt has been a great asset to the business and has brought new ideas and a determination to make exciting and creative designs happen.”

JDP has recently taken on RIBA qualified architect Richard Bailey to increase the workforce at its Station Lane practice to seven.